Rustic Without the Rust

Rustic, without the rust 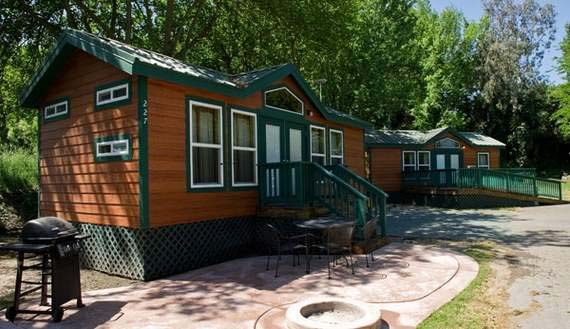 Prefabricated cabins are nestled under the trees at the Stockton Delta KOA Kampground on Highway 12 east of Lodi.
- CRAIG SANDERS/The Record

That old log cabin at the campground, with the wind whistling through chinks in the logs and a potbellied stove for heat, is giving way to upscale prefab dwellings with showers, kitchenettes and air conditioning.

Campgrounds are turning to the so-called park model cabins or park trailers to attract customers who don't own RVs or can't stand sleeping on the ground.

So you now can enjoy being immersed in the great outdoors, waking to views of rivers, lakes and mountains or swapping stories with newfound friends around a fire ring while still being able to watch a flat-screen TV and get linen service.

"It's sort of that missing link to the camping experience," said Scott Haar, manager of Stockton Delta KOA Kampground on Highway 12 west of Lodi, which has 19 of the park models installed.

"It's basically you're getting the ability to go out and camp and have all the comforts of home," he said.

The campground, where the park cabins are called lodges, got a handful of the units beginning in 2007 and has added more since. KOA is among the industry leaders in adding the park lodges, Haar said.

KOA may be leading, but much of the campground industry is following, said Lincoln Young, general manager of Collins Lake, a private campground and recreational facility northeast of Marysville.

"We've had them for seven, eight years ... and our experience has been good," he said.

The campground, with more than 300 RV spaces in all, has six of the park cabins and three recreational camper trailers parked in camping spots and available for rent.

"Customers that would like to have an outdoor experience but don't own an RV ... prefer the cabins over the trailers," Young said.

But by law, they are treated as temporary or mobile shelters, registered as vehicles and regarded as personal property, not real estate, he said.

The primary distinguishing feature is that they have to cover less than 400 square feet, measured by exterior dimensions. Thus, they don't have to meet federal housing standards and are intended primarily to serve as vacation or seasonal dwellings, not year-round use.

Garpow, whose Newnan, Ga.-based trade association represents park model manufacturers, said the industry began carving out its niche in 1983, and annual sales reached as many as 12,500 units in 2006.

With the Great Recession taking its toll on many parts of the economy, sales dropped and currently run about 4,500 a year. "We're slowly coming back up," Garpow said. But sales to campground operators have continued.

Park cabins offer campgrounds a great deal of flexibility and, again, attract customers they might not otherwise be able to serve. Operators obtain a unit, move it into an RV camping spot and plug in the existing electric and water supplies.

"It's ideal from that standpoint, because the park owner doesn't have to go out and purchase a motel building," Garpow said. "He can put these things in one at a time or 10 at a time, whatever his needs are."

It's certainly a lot easier than trying to build a cabin from the ground up and having to obtain building permits and clear inspections along the way, Young said.

"You're taking an already licensed, permitted RV space and hooking up these portable buildings," he said.

The beauty of the park model cabins is that they are comparable to well-appointed hotel rooms, Haar said. "They're really nice."

Some models offer separate bedrooms, sleep up to six people and are equipped with televisions, as well as niceties such as microwave ovens, DVD players and showers.

"On top of that, you have all the activities of the campground and the recreation of the Delta," Haar said. "That's something you can't do in a hotel."

Ready to find out more?

Submit a custom quote request or give us a call.